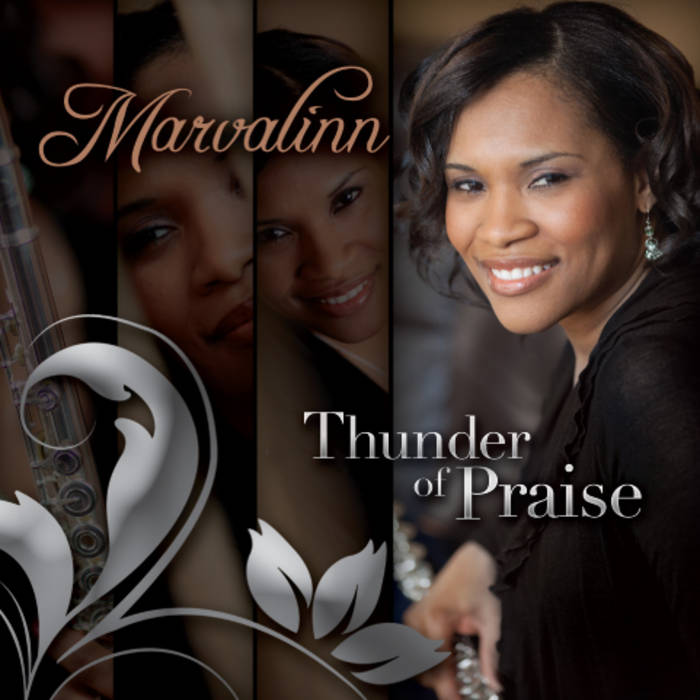 Marvalinn is a native Detroiter and currently resides in Metro Detroit with her husband Nate and their four children. She grew up in the city with her parents and seven brothers and sisters. She started singing and playing piano at church and in school at an early age. She picked up the flute a few years later.

While in college she met her husband and best friend, Nathan. He encouraged her to start playing and singing professionally. During this time, she also started writing her own songs. Since then, she has released two independent albums “No Greater Love” and “Thunder of Praise”. Currently, she is working on her 3rd album.

Both Nathan and Marvalinn have a vision for God’s people to come into maturity and take their place as sons and daughters in the Kingom of God. "We must exercise the authority we have in Christ and declare the word of God in the earth for kingdom advancement. We are to bring a godly transformation in our environment and realms of influence and purposefully teach and train the next generation to bring this into their generation and the generations to come. "

Marvalinn has a heart for Detroit. She believes a day will come when Detroit will not be called a barren and forgotten land, but rather be looked to as a light to the nation.

HIGHLIGHTS:
Marvalinn serves on her worship team at her church, Harvest Christian www.harvest-christian.org She has been requested by Patsy Clairmont, Women of Faith speaker and bestselling author of “God Uses Cracked Pots” distributed by Focus on the Family, to sing and play at a special women’s event. She also appeared on the Emmy nominated show, “I’m Just Sayin’” with Pastor Dan Willis on the TCT Network and recently appeared on the "Dorinda" television show. She also was requested by grammy winner Dorinda Clark Cole to perform at the 12th Singers and Musicians conference in Detroit.

October 2010, Marvalinn's song "Your Face Shines" won 2nd place in her group for Pop/AC genre at the "Write About Jesus" songwriting conference. www.writeaboutjesus.com In May, 2008 Marvalinn was the winner of the "Dreams are Possible" competition held by LaShell and Lee Griffin of DAP Music. LaShell was Oprah Winfrey's Popstar winner in 2004. Marvalinn was also announced the American Idol Underground Big Push 2 faith-based winner in June 2007. This competition took place over the internet where listeners choose their favorite song. “Press On” was the song that secured the #1 spot for Marvalinn. At the time of the win, American Idol Underground was in partnership with the producers of the television show American Idol.

Marvalinn is currently one of the four worship leaders at her home church (Harvest Christian Church). She has been leading worship for over 15 years.

Marvalinn also home school’s her four her children who often join her in leading worship at Harvest Christian Church in Detroit, MI.

Marvalinn says” I enjoy singing, writing and playing because it brings life and much joy, not only to me, but to those around me. I know that the people are blessed when I sing and when I play the piano and flute. You can just see it on their faces. It’s very satisfying and fulfilling, and I know it pleases the Father.”

Marvalinn has a vision for God’s people to come into maturity and take their place as sons and daughters of the Most High. "We must exercise the authority we have in Christ and declare the word of God in the earth for kingdom advancement."

For surely o Lord you bless the righteous
And you surround us with your favor
You’re making a way for your sons and daughters
Enlarging our boundaries across this land
When the enemy comes he falls and stumbles
As the army of God swiftly approaches
All voices raised
A thunder of praise
Proclaiming your name
Track Name: Your Face Shines
MARVALINN STULL©MARVALOUS MUSIC
Chorus
Every day when I think of your goodness
Every day when I think of your love
Every day it makes me shout halleluiah
I thank you God for saving me
Every day when I rise in the morning
Every night when I go to sleep
Your face shines upon me

Verse
I’m a testimony of your goodness
I’m a display of your grace
I’m the voice in the wilderness proclaiming
“Prepare ye the way”
I’m the daughter of the almighty
I am destined for great things…
Your face shines upon me
Bridge
Your favor covers me
Your Spirit, He guides me
Your righteousness protects me
Your presence brings victory
Track Name: Face to Face
MARVALINN STULL©MARVALOUS MUSIC
It’s just you and me Lord
Here face to face
The joy of your presence
The wonders of your grace

For a great is your mercy
And great is your grace
Mighty are you acts Lord
And mighty are your ways
Track Name: Completely Amazed
MARVALINN STULL©MARVALOUS MUSIC
Verse 1
You are my love you came to me
Filled me with hope, filled me with dreams
You gave me peace when you rescued me
My God and King in awe I sing...
Chorus
Completely amazed at your wonders
Completely amazed in your love
Standing in awe in your presence
Completely redeemed by your blood
Verse 2
Radiant light, breathe into us
New songs of joy new songs of life
Sweet holy fire, rage deep in us
Our hearts we bring, in praise to our king
Bridge
Sing a new song
Songs filled with hope
Songs filled with peace
Sing a new song
New songs of joy
New songs of life
Track Name: All Things New
MARVALINN STULL©MARVALOUS MUSIC
Verse 1
Bright Morning Star
Radiant you are
Lead, be our guide
Enlighten our eyes
Pre-Chorus
As we worship you
In spirit and truth
Let every tongue confess
Of your strength, your righteousness
Chorus
How beautiful how marvelous
Creation adores you
You make all things new
Verse 2
Timeless and Just
Breathe your Word through us
Touching every life
This is your heart’s desire
Track Name: Great I Am
MARVALINN STULL©MARVALOUS MUSIC
Who was, who is, who will always be
Chorus
You are the great I am
You are the great I am
And you will always be
Vamp
You will always be
Track Name: The Time is Now
Amy Kamm & Marvalinn Stull ©marvalousmusic

Bandcamp Daily  your guide to the world of Bandcamp